On that Tuesday evening (Oct. 28, 2014)  we summoned the Hospice nurse. His time was close. There was not an overwhelming air of deep sorrow in the house where my mother and I were with a few other family members. We all knew this was the time and he was ready to break through the dark glass to see and know his Lord even as his Lord had known him for 77 years.

As his health declined, I got a bit of an early inheritance. I was given my father’s library. He gave it to me while he was in one of his lucid moments which were becoming 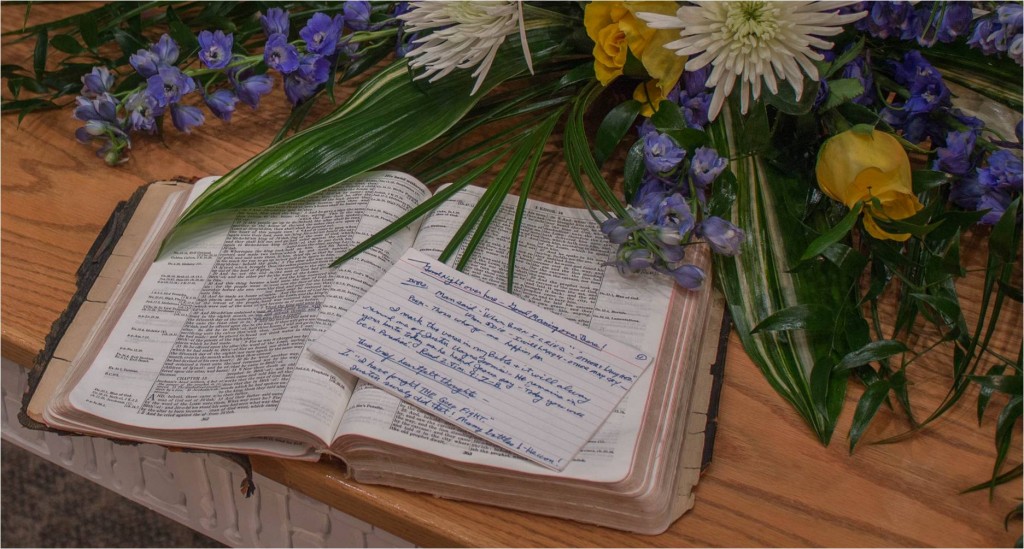 less frequent. There were still enough of them for him to know that there would be less of them as time went on. He treasured his books and wanted me to use them as did he to prepare for the proclaiming of the best news ever – The news that Jesus Saves. I treasure them as well.

In that stack of stuff that he had been keeping close and not shelved nor boxed was a Bible case with a Bible inside. When I unzipped that small pocket on the front of that case, there it was. The only thing in that pocket was a set of four by six index cards, the kind which he always used for pulpit notes. It was not just a random or recent sermon on that set of cards though. It was the sermon that he told me that I was to preach at his funeral. I was content that I must fulfill this mandate from my father.

That night, to the sound of a CD of him playing hymns on the church organ from a few years earlier, and the muffled sounds of family and friends and a couple of the sweetest caregivers Hospice ever had all half singing and half mumbling the song “When We All Get to Heaven”, my father breathed his last stinky polluted breath on this old earth in his worn and struggling body, and breathed a great big sigh of relief while standing tall and whole, complete in mind and spirit. He entered Heaven. It was a peaceful moment. It was purposeful. It was planned, for “it is appointed unto man once to die” (Hebrews 9:27). On some level that many may not understand, it was even pleasing. On that same level, I find myself a bit jealous.

On October 31, while many others were celebrating demons and death and other dark things, we gathered at the church house and celebrated Heaven and life and the Light of the World, Jesus Christ who had welcomed my father into His Father’s house just a few days earlier. Bro. Jack was remembered by someone from each of the five decades in which he pastored. We sang some of Bro. Jack’s favorite hymns. And Bro. Steve, that’s me, preached one of

I know that there is not a shred of Biblical evidence suggesting that he could have been right there with me. I know that he was not and it would be mere selfishness to wish that he were. But, as I said some of his regular phrases and unfolded one of his hand written and personally chosen outlines, I had a clear view, if only in my mind’s eye, of that proud semi-smile which I always saw when he would visit my congregation and hear me  preach what might have also been one of his sermons.

Then the king said to the man of God, “Come home with me and refresh yourself, and I will give you a reward.”  1 Kings 13:7 NKJV