In season 6 of Star Trek, The Next Generation, there is a two part episode called “Birthright.” In this episode, Worf, the Klingon character played by Michael Dorn, encounters some survivors of the Khitomer Massacre – there were reported to be none (the Khitomer Massacre was a Romulan attack on the Klingon colony on Khitomer in 2346). These survivors were both Klingon and Romulan and there were those of subsequent generations that were of both races. This was shocking to Worf who only knew of hatred and animosity between the two races, resulting in a large part from the Khitomer event. Yet here were Romulans and Klingons living together and happily ever after.

From the point of view that Worf brings to the encounter, there were several things that were conspicously absent from this new culture. While Worf was versed and rehearsed on the literature and dogma of the Klingon people, there was no one telling these stories to the young. No one was telling them of their proud heritage. They were instead mixing theirs with the Romulans and clouding the picture. Worf begins to tell the stories. Though he is met with some resistance, he is allowed to continue.

Enter Ba’el. Ba’el is young girl, of mixed blood, who is taken by the stories of Worf. She listens to them. 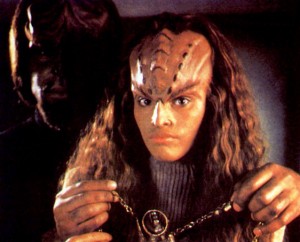 She remembers them. She meditates on them. She asks questions about them. Her curiosity has been awakened and she wants to know more, because the teller of those stories has a passion for and eloquence with those stories like no one she has ever heard. As the episode nears conclusion, Ba’el questions Worf:

Ba’el: “These stories you tell, are they true?”

Lt. Worf: “I have studied them all my life and find new truths in them.”

How often do you find an audience for the timeless truths in the immutable Word of God? Are those truths alive in you? Have you studied them all your life? Are they fresh enough for you to tell them any time the moment allows? Are they so much a part of you that you can’t possibly allow them to be absent? And, perhaps more importantly, is the “Truth” of the most grand story ever uttered, the reality of redemption, so real that you can find new “Truths” as God reveals the deeper things of scripture to you?

Teach me, O Lord, the way of Your statutes, And I shall keep it to the end. Give me understanding, and I shall keep Your law; Indeed, I shall observe it with my whole heart. Make me walk in the path of Your commandments, For I delight in it. Incline my heart to Your testimonies, And not to covetousness. Turn away my eyes from looking at worthless things, And revive me in Your way. Establish Your word to Your servant, Who is devoted to fearing You. Turn away my reproach which I dread, For Your judgments are good. Behold, I long for Your precepts; Revive me in Your righteousness.  (Psalm 119:33-40 NKJV)