In the 1957 film The Spirit of St. Louis James Stewart portrays Charles Lindbergh in his struggle to make his New York to Paris flight, the first solo transatlantic crossing. During the course of events portrayed, there are several flashback scenes which help to describe the struggles that led to the triumph at the end of the movie.

One such flashback shows the young Lindbergh giving a flying lesson to a priest. The cockpit conversation turns to God – Charles Lindbergh was not known as a great man of faith. I enjoyed the way the priest makes clear why God is worthy of being the object of his faith. Here are a couple of lines from that dialogue; 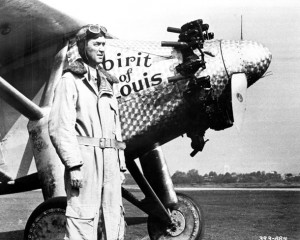 were up in the air and the engine conked out and you were falling out of the sky, do you think God would help you then?

Isn’t it enough to know that God knows when we’re falling? I suppose that it should be enough, but there are times when it just doesn’t seem to be so. There are times that we want, and believe that we need more than simply the knowledge of His knowledge. After all, I have seen many airplanes falling from the sky thanks to photographers who knew that the planes were falling and could do nothing but watch and document. If watching is all that God does, is that enough?

The theologian in me wants to say that it is, but the weak and wounded child in me wants to cry out at the top of my lungs, “No, I need more!!!!” And the reality is that God offers more. But, sometimes, before He gives us the “More” it is necessary that we become content with simply knowing that He knows. Then, be very attentive because God will always be near. He is not known for being just a spectator.

I cry out to the Lord with my voice; With my voice to the Lord  I make my supplication. I pour out my complaint before Him; I declare before Him my trouble. When my spirit was overwhelmed within me, Then You knew my path. In the way in which I walk They have secretly set a snare for me. Look on my right hand and see, For there is no one who acknowledges me; Refuge has failed me; No one cares for my soul.

I cried out to You, O Lord: I said, “You are my refuge, my portion in the land of the living. Attend to my cry, For I am brought very low; Deliver me from my persecutors, For they are stronger than I. Bring my soul out of prison, That I may praise Your name; The righteous shall surround me, For You shall deal bountifully with me.” (Psalm 142 NKJV)