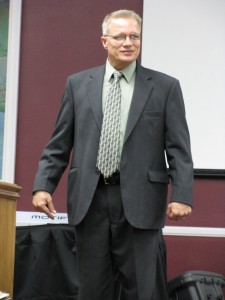 I really do like my suit and tie. It is a style of dress that I am comfortable wearing. But it is traditional, and what most would call formal. I find no real problem there. In fact, in the current trend of trying to become the people we are trying to reach, I find quite a dichotomy in the assumption that those people we are trying to reach want us to be them before they will have a conversation with thus. Perhaps that speaks to our own insecurity or even judgmental pride.

So here I want to assert this. If it is true that we are trying to be real in reaching people, that real means that we are to be who we are too, not try to be who they are. OK, so Paul said he became all things to all men so he might reach some (1 Corinthians 9:22). That much is true. But did he mean that we have to dress in beach wear to reach someone who does not own a pair of dress shoes, much less a tie. Does that mean we have to use profanity while trying to impress people with real life Christianity when we don’t use it in our other conversations? Does it really mean that we must “Be fake” to “Be real?” My brain spins at the thought.

I know people that never wear a long sleeve shirt. They think that if a shirt has more than three buttons it has too many. Their wardrobe only has long pants and socks for cold weather. I think they are weird. I always wear long sleeves. I like long sleeves. I am comfortable in long sleeves, even when I lived in the desert. I always wear socks. I am extremely uncomfortable in sandals and if I were to wear them even in public, I would wear socks. But I do not wear open shoes except at my house. I like big clunky heavy shoes. They are comfortable to me. People who wear flip flops everywhere are weird to me.

Some time ago, my family went on a hike and into a cave on a tour at a state park. There was a woman on the tour in shorts, tank top and flip flops. She walked along the rocky trail and explored the cave in that attire, wearing those flip flops. She was weird in my estimation. It was cool in that cave and the terrain was rough. There was certainly, in my opinion, a better way to dress for that event.

Perhaps another illustration will be of benefit here. I have driven eighteen-wheelers to earn part of my family’s living. While driving, even in the summer, I wear long pants and usually wear boots. That is my style and I am comfortable there. Everyone with whom I worked knew that I am a pastor. It is the point of a lot of jocularity in the yard and over the CB on the road. Often they joke that we are the only crew in our business that has a built in chaplain when we respond to fires and other disasters.

There is also the regular “Sorry preacher,” when the off color joke is told or the four letter word is used. I always try to take that opportunity to tell them that I am not offended when they are real. In fact, I am more offended when they try to put on a face for me just because I profess Christ. Then I ask for the respect of their just being themselves and allowing me to be myself. And if I find any offense, I promise that I will not push guilt on them. I think they respect that more than they would if I were to either act like them or ask them to act like me. That is the real in which they can have conversation and share some of life with me and I can share with them.

There are many who will vehemently disagree with me having glowing eyes, gravelly voices and smoke coming out of their ears. They may say that we must be more like the culture we are trying to reach if we are going to reach them. Well, I’ll let them disagree, but I think they are dead wrong. I give people, even lost and worldly people, more credit than that. They can see through that kind of falseness, just like we can see through theirs when they try to be like us.

In case you missed it, the point of this rant is not clothing or language or socks or long sleeve shirts. The point is being real – really real. People are not looking for someone just like them to learn from and live with as much as they are looking for someone who will just relax enough to be transparently real.

When I preach I am going to wear my suit and tie. I happen to like that. When you meet me on the street, you will probably see me in a long sleeve shirt with socks and big clunky shoes at the end of my long pants. That is who I really am and what I really wear. If that is not you, then you do your real thing. That is honest and honorable. People with a brain, which is more of them than we often give credit to, will respond to that. But if you feel you must put on a face and a show to reach someone, all I ask is that you think how you would really feel and what you would really think of that person who puts on a fake face to impress you. I would guess that you would see this as less than honest, and less than real, and would probably not give trust to whatever that person is selling. You’ll probably let him keep his used car. What we as “Christians” have to offer is much more valuable than that?